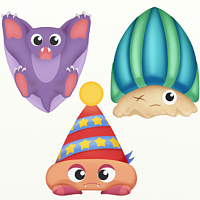 Since years, the logic course in the first year of our Bachelor program in Computer Science, dealing with propositional and predicate logic, suffers from poor pass rates. The students perceive the formal and abstract mechanisms of logic as difficult and awkward to deal with. Many students do not study the course material on a regular basis, which results in poor mastery of the basic concepts and principles. Consequently, students often fall behind as the course progresses. Previous attempts to remedy this procrastination behavior had little success. Since educational games are commended as an enjoyable way to foster learning, we decided in 2016 to develop an educational game for the course. This game, called TrueBiters, is a two-player competitive game inspired by an existing card game. We adapted this card game to propositional logic and digitized it as an app. The development was done in an iterative way. Each version was evaluated and using the received user feedback and evaluation results the game was improved and reevaluated. Based on the results of the evaluations we can conclude that the game is well suited for its target audience, i.e., logically-mathematically intelligent people, and is a good supplement, and even replacement for some of the traditional face-to-face exercise sessions. However, we also learned that a proper embedding into the course is needed to ensure that all students actually use the game and benefit from playing it. In this paper we present the game, explain and motivate its evolution, discuss the evaluations performed, and present lessons learned.