The Lost Cosmonaut: An Interactive Narrative Environment on Basis of Digitally Enhanced Paper 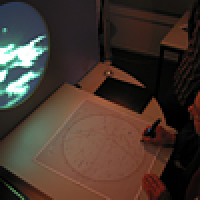 The Lost Cosmonaut is an interactive narrative based on digitally enhanced paper. This technology uses an electronic pen to mediate between paper and computer. Thus any actions of the pen on the paper can be captured and manipulated by a computer as well as we can map digitally controlled events onto paper. The story in this narrative environment reveals itself partially through written text and images on the paper surface just as any other printed story. However, additional information in form of digitally controlled outputs such as sound, light and projections can be accessed through interaction with pen and paper. Furthermore the audience is not only supposed to read and otherwise perceive information, we also want them to actively produce content for this environment by writing onto the paper. By doing so they also
add content to the database containing the digital output at the same time. Hence we produce a complex multimedia environment that works on three levels: On paper, in a digitally controlled visual and acoustic environment and in the combination of both worlds. Last but not least this environment is an open system, which grows as a collaborative effort over time as each user adds his own entries to paper and database.
We argue that using paper as an integrated part of a digital environment is a best-of-both-world approach that opens up new possibilities for producing and perceiving narrative.
Publication Reference
Vogelsang, A. and Signer, B.: "The Lost Cosmonaut: An Interactive Narrative Environment on Basis of Digitally Enhanced Paper", Proceedings of International Conference on Virtual Storytelling 2005, Strasbourg, France, December 2005