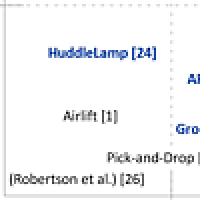 Over the last decade we have seen various research on distributed user interfaces (DUIs). We provide an overview of existing DUI approaches and classify the different solutions based on the granularity of the distributed UI components, location constraints as well as their support for the distribution of state. We propose an approach for user-defined cross-device interaction where users can author their customised user interfaces based on a hypermedia metamodel and the concept of active components. Furthermore, we discuss the configuration and sharing of customised distributed user interfaces by end users where the focus is on an authoring rather than programming approach.
Publication Reference
Sanctorum, A. and Signer, B.: "Towards User-defined Cross-Device Interaction", Proceedings of DUI 2016, 5th Workshop on Distributed User Interfaces, Lugano, Switzerland, June 2016