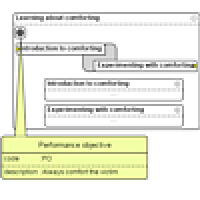 Creating serious games calls for a multidisciplinary design team, including game developers, subject-matter experts, pedagogical experts, and narrative designers. However, such multidisciplinary teams often experience communication and collaboration problems due to differences in terminology, background and the concerns of the people involved. As one step towards solving this problem, we developed a modeling language for authors of serious games to specify both the story and the pedagogical aspects of a narrative-based (i.e., story-based) serious game. The models created with the help of this language can then be processed in order to automatically generate (parts of) the game. The language is specifically designed to support the involvement of experts with a non-technical background. To achieve this, we employ a domain specific modeling language, i.e., a language specific for the domain of serious games and customizable to the terminology of the domain the serious game is dealing with. Furthermore, the language makes use of a Controlled Natural Language syntax and graphical notations. The combination of a domain specific vocabulary, a natural language syntax, and an easy to understand graphical notation allows different experts to be actively involved in the specification of the serious game, as such increasing consensus and enhancing quality. Furthermore, the model-based approach allows for a shortening of the development time of serious games (and therefore also their cost). As such, the approach tackles one of the major barriers for the development and widespread use of serious games. In this chapter, we present a complete overview of the domain specific modeling language and the associated tools developed to support the model-based approach.
Publication Reference
De Troyer, O., Van Broeckhoven, F. & Vlieghe, J. (2017). Creating Story-based Serious Games Using a Controlled Natural Language Domain Specific Modeling Language. In: Serious Games and Edutainment Applications: Volume II. Ma, M. & Oikonomou, A. (eds.). Cham: Springer International Publishing, pp. 567 603