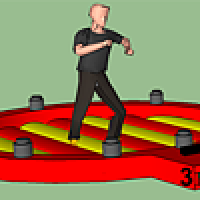 Water Ball Z is a novel interactive two-player water game that allows kids and young adults to "fight" in a virtual world with actual physical feedback. The body movement of a player is captured via an RGB-D sensor and analysed by a 3D gesture recognition engine. In order to enable tactile feedback without the need for wearable devices, a number of water nozzles are positioned around each user's play area. The idea is to translate the input gesture of one player to the corresponding water spray hitting the other player. Besides severely reducing the risk of injury in a fight, Water Ball Z engages people in a real and fun experience where a hit is physically manifested via a water spray. Furthermore, power up moves and a live scoreboard extension bring the virtual world of Dragon Ball Z and Mortal Kombat cartoons into real (augmented) life. In addition to a detailed description of the physically augmented game, we discuss two new control parameters for mapping gesture input to haptic output which, to the best of our knowledge, are not present in existing 3D gesture recognition approaches.