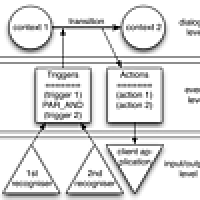 We present the results of an investigation on software support for the SMUIML multimodal user interaction description language. In particular, we introduce a graphical UIDL editor for the creation of SMUIML scripts. The representation of data as well as the dialogue modelling in our graphical editor is based on the SMUIML language. Due to the event-centered nature of SMUIML, multimodal dialogue modelling is represented by a state machine in the graphical SMUIML dialogue editor. The editor further offers a real-time graphical debugging tool. Compared to existing multimodal dialogue editing solutions, the SMUIML graphical editor offers synchronised dual editing in graphical and textual form as well as a number of operators for the temporal combination of modalities. The presented graphical editor represents the third component of a triad of tools for the development of multimodal user interfaces, consisting of an XML-based modelling language, a framework for the authoring of multimodal interfaces and a graphical editor.
Publication Reference
Dumas, B., Signer, B. and Lalanne, D.: "A Graphical Editor for the SMUIML Multimodal User Interaction Description Language", Science of Computer Programming, 86, June 2014